Written by Jeremy Docteur on 18 May 2013. Posted in Captain Fantactique

How mad is football? Not so long ago, Arsenal only had a little hope of qualifying for another season in the Champions League. Today, the situation has drastically changed. The Gunners have their destiny in their own hands, thanks to a great run of good results and disappointments from Chelsea and Tottenham. Besides the numerous possible scenarios a win would basically guarantee 4th place and even maybe 3rd place if Chelsea happens not to win their encounter. The latter assures Arsenal achieve the intended target of a place in the lucrative group stages of the European Cup.

Arsenal paid for their slow start to the season and we could say that the season has been very wobbly overall. The Gunners exhibit technical and tactical issues, and even though the situation looks better now, there are still chinks in the armour that have to be ironed out as soon as possible. With the end of the season looming today's column won't focus on the tactics that have got us to where we are/stopped us from winning the league depending on your view point but will hopefully provide a general analysis of Arsenal's organization this past season.

This season Arteta started in a deep defensive midfielder type position. Limitations were quickly exploited by the opposition and Wenger had to react. The evocation of the 4-3-3 display was not enough anymore, Arsenal was too crumbly defensively, and Arteta was no longer the master of the subject. The Basque stands 3rd in the most fouls committed by a player in the Premier League table.

Then, unevenly at least, Ramsey was set next to him. Arsenal went for a 4-2-3-1 with a duo made of Ramsey and Arteta in a kind of "double pivot". And the makeshift change actually worked out quite well. Ramsey is among the best players in terms of defensive statistics; tackles, interceptions, clearances etc. Paradoxically, last year, he was used as an attacking midfielder.

The other change is Cazorla's repositioning on the left flank. Due to a lack of fluidity and creativity, Wenger decided to set place the Spaniard on the wing. It automatically resolved another problem; the trio with Arteta, Wilshere and Cazorla didn't work because the latter two overlapped each other's roles. Both like it when they can play high up the pitch behind the striker. Wenger persisted with Wilshere after his tremendous return from injury in the first part of this season. Nevertheless, he still wasn't at the 2010/11 season's level alongside Fabregas and co. He picked up a new injury and Wenger had to do without him. Since his return, the Englishman seems ill at ease; therefore the Czech Tomas "Little Mozart" Rosicky completes the midfield.

This is a classic situation. Ramsey and Arteta are more or less alongside. The full backs move forward to be higher on the pitch in order to enlarge the bloc and gain spaces to throw the ball back up the field, then offer a tangible solution. Afterwards Arsenal's bloc goes higher.
In a more attacking phase, the double pivot Arteta/Ramsey advances with the team. Nonetheless, the tactic is set to allow one of them to go forward while the other one stays behind him, in retreat. 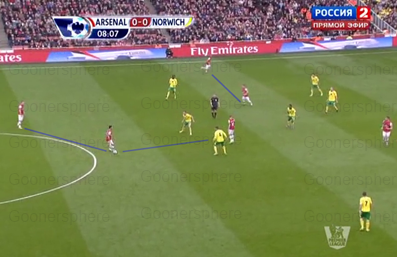 Here, Ramsey is in retreat. It's a typical case for the Gunners. Namely, a possession phase without any clear solution. In front, Cazorla moves forward, the defender follows him and Gibbs goes on the overlap. Giroud drops back and offers a solution. Wilshere attracts a couple of players. The duo basis in retreat always permits to have a fallback solution, eventually.
At the start of the season, Arteta held a deeper position. This position isn't the right one for him; he is restrained, and limited in all of his gestures. It is logical because he has to stick with his deep position. Presently, Ramsey's support permits the Basque to go higher and participate in the attacking phases without jeopardizing Arsenal's defensive cover. In fact, in the 4-3-3 at the start of the season he was the only one to assure a protection to the centre backs. Ramsey covers him whenever he chooses to push higher and vice versa, actually.

In this situation, the game leans towards the right side simply because on counter attacks or basic attacking phases, Walcott gets positioned next to Giroud. Sagna is on his own on the right, without any support. To counterbalance, a midfield will slide on the flank. Arteta in that case regains possession. Cazorla or the other side changed his zone to make up the numbers in the center. Yet, the 3 midfield basis is solid; they are all near to each other.

Here is the perfect illustration of the phenomenon described above.

Walcott drifts, he is a center position. It is like there was going to be a switch between Walcott and Ramsey's position. The latter uses Rosicky as a relay. Without any doubt, this is harmful for Arsenal. The free space on the right is exactly where Walcott should be to trigger his run. In immobile phases, Walcott is useless; he needs space to express himself. He doesn't (and can't) use his main asset: speed. Sagna is yet to counterbalance the tactical shortcomings of the English winger.
With Wilshere it's another story because the Englishman prefers to play higher than Ramsey. Let's compare the respective heat maps when both players were holding the same role in two different games:

At the start of the season when Diaby was fit and on fire Arteta and Diaby formed a double pivot too and it actually worked pretty well; we all recall the superb victory at Anfield back in September. Diaby guaranteed pace, physical strength and helped Arteta with the defensive tasks. 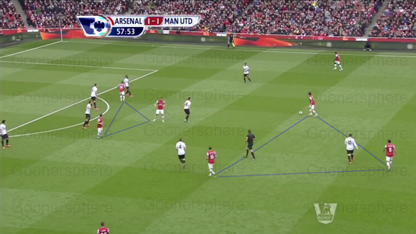 One can notice Arsenal switching to 4-3-3 on attacking phases. As explained previously, one of the two "regaining-ball" midfielders slide higher than the other. The 3 in front reorganize themselves. It is important to notice that all three players tend to prefer axis roles but in different ways, of course. The full backs are relatively high on the pitch.
Arsenal often misses a forceful player in the centre. The Gunners tend to persist with the idea of playing via the wings. Nevertheless, the fact that three players are in the centre doesn't mean that the issue is resolved. Wenger asks his players to find a compromise between both solutions because it is hard to expand the bloc to create space in this case.
That way, you can say it is a 4-3-3 by default where the front 3 all play on the same line, wandering around each other.

4 – The defensive stages and the pressing

In theory, the pressing should resemble something like this. In theory only though. Take a look at the scoreboard and you will understand; we are only at the start of the game. Afterwards the situation evolves, and it gets messier. The midfielders respect the pressing and are willing to do it efficiently. On the other hand, the attacking trio releases it, especially the wingers. On numerous occasions, the full backs find themselves left alone against the opponents.
It is a 4-2-3-1 (here Arteta goes forward to block Jones. One might think it is a 4-3-3 but he replaces himself afterwards) which rapidly becomes a 4-5-1 with a 5-man line.

Carrick is in possession of the ball as Arsenal display their 5-man line. Cazorla attempts to block a potential pass to Rafael on the wing whilst behind him Gibbs is ready to intervene if necessary. On this present phase one of Arsenal's players will move forward towards Carrick and press him in order to obstruct him and contain his liberties. Arteta will be in charge of this task. Mechanically Cazorla moves in and Gibbs moves forward in direction of Rafael to keep a sealed line.
Yet again, the theory will take over the practical implications. The wingers will tire and abandon their defensive task, start walking and spread mayhem across the entire organization. 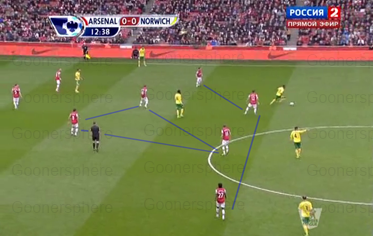 When an opponent is under pressure, the attacking midfielder and the two wingers get out. Cazorla tightens the axis. Giroud supplies more effort than Podolski, and is part of the defensive duties.

In 4-3-3 or 4-2-3-1 depending on the situations, Arsenal has kept a solid basis for many years now. Wenger relies on this display which always functioned. Today, it isn't as "razzle-dazzle", but is it worth condemning him for it? I don't think so. It is difficult to perceive Arsenal changing its tactical system. A passage to 2 strikers is often requested, it never happens for 90 minutes but the changes Wenger operates during the game sometimes transforms the team. Arsenal's force these last few years was to maintain a system that truly works. Quite simply, the players have to adapt themselves. Easier said than done, though.

Let's not forget Arsenal adopt a high defensive line on the pitch as is evident from the pressing and the players' positioning. However, Arsenal remain on 9 games without losing (with 7 victories) and despite the various shortcomings, the fact remains that every element in the team wants to get the "consolation" prize, the "mini-trophy", a qualification to the group stages of the Champions League.

Thanks to Squawka, WhoScored, ESPN, Россия-2 and Sky Sports for images and statistics.

Follow @BackothedocTell us what you think! If you agree, or have a different view, please leave a comment in the comments section or why not write a response or your own article on YouWrite?