Welbeck Could Be The Striker Wenger Wants

Written by Tim Stillman on 24 July 2015. Posted in Stillmansphere Arsenal have arguably addressed their most pressing squad need very early in the window with the acquisition of Petr Cech from Chelsea. The idle transfer talk revolves around upgrading and there is a very broad consensus on the two positions where Arsenal could do with some decoration. The emergence of Francis Coquelin has at least partially cooled the Arsenal jets in the screening midfield position (though not entirely given Arteta’s age and fitness levels). Centre forward is of course, a much sexier position and most of the chatter has focused on the Gunners finally acquiring that genuinely top class centre forward.

Arsenal has a great tradition of strikers, from Buchan, to Drake, to Rooke, Baker, Radford, Nicholas was a star name, even if not a stellar success, Smith, Wright, Henry and (spits) van Persie. Assuming you are under 100 years old, you will remember a great Arsenal striker. Olivier Giroud is a very good striker and a fantastic asset to the team that enables teammates to score, even if he isn’t necessarily a pure goalscorer himself. However, it’s not unfair to suggest that he doesn’t quite fit the top shelf of Gunners centre forwards. That said, he is consequently unfairly maligned.

It’s widely acknowledged that there is a dearth of world class number 9s at the moment, a subject Amy Lawrence tackles nicely here. Though there is still breathless talk of Benzema (whom it should be noted, for his quality, isn’t an automatic pick ahead of Giroud at international level), there has been a lot of debate over who can and should lead the line for Arsenal. Theo Walcott’s exploits in the final seven days of last season have reignited the debate as to whether he should play centrally. Likewise, Alexis Sanchez has been trialled as a false 9 in Arsenal colours and it might not be an experiment that Doctor Wenger is finished with just yet. 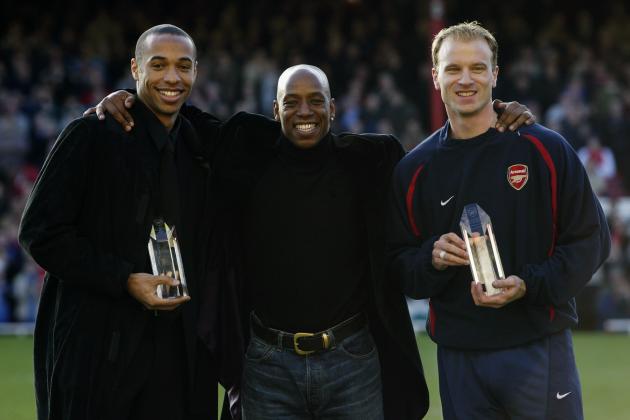 Much of the debate stems from Wenger himself, it must be said. I think he is reasonably happy with Giroud until a better alternative comes along, but his behaviour suggests that he is very open to upgrade. Despite being a regular starter, Giroud has been left out of some big games over the last two seasons. Bayern Munich in the Champions League, Liverpool in the F.A. Cup, the F.A. Cup semi-final in 2014 and the F.A. Cup Final in 2015. We know that the manager pursued Gonzalo Higuain and Luis Suarez in the summer of 2013. Wenger does not have the absolute conviction in Giroud that he reserves for his true star picks.

No matter their form or fatigue levels, the likes of Özil, Cazorla and Alexis are never spared. In many ways, Giroud was unlucky that his end of season goal drought coincided with the Cup Final. But Alexis’ scoring form was in disrepair in the build up to the final too. I very much doubt there was a second’s hesitation in including his name when Wenger penned the team sheet. Giroud made his debut from the bench in 2012 against Sunderland, with Podolski preferred at centre forward that day. I think Wenger’s initial plan was for Podolski to replace van Persie and for Giroud to become a kind of emergency option from the bench. For Arsenal’s first away match last season at Everton, Giroud was again on the bench, with Alexis preferred as the central striker.

On both occasions, Giroud has strong armed his way back into contention, to his credit. But I think it reveals that Wenger ideally wants to operate with a more mobile striker. This is the manager that gave George Weah and Thierry Henry to the world, after all. It’s understandable therefore that debate has raged over the merits of Walcott, Alexis or A.Nother as Arsenal’s striker. One man who does seem to have been omitted from the argument is Danny Welbeck. Welbeck missed much of the second half of the season through injury. His most recent appearance saw him put in an underwhelming display against Reading at Wembley, which ran contrary to the promising signs he showed earlier in the season, when Giroud was laid up with injury.

I remain to be convinced that Welbeck was not a ‘needs must’ signing on Wenger’s part. (It’s strongly reported that Arsene only wanted a loan deal). But with Giroud injured close to the deadline and Welbeck training at London Colney with England, he pretty much fell into the net. However, arguably Welbeck fits the profile for the striker Wenger wants better than anyone else in his squad. He is mobile and has great upper body strength, he presses hard from the front and he is technically very sound. At Villa Park last September, he recorded a 100% pass completion rate from the centre forward role.

His performance at Villa Park was, at the risk of hyperbolising, Henry-esque. Probably even more so than his display against Galatasaray at the Emirates, when he bagged a hat trick. With Özil floating around behind him, Welbeck played on the shoulder of the Villa defence and pressed their centre halves. He dropped off into wide areas too to make space for runners and he scored, crucially. A 100% pass completion rate is freakish for somebody playing so high up the pitch. If Welbeck could produce that kind of performance on even a semi consistent basis, then the no. 9 role would be very much his from Arsenal’s existing options. The issue for Welbeck now is the same as it has always been; he needs to become more decisive in the final third. (It should also be pointed out that Walcott and Giroud also destroyed Villa from the centre forward position in corresponding fixtures).

As last season wore on, Wenger began to move Welbeck to the flanks, as Ferguson had before him. This is because he is a selfless and tactically intelligent player; he fits the mould nicely for an Arsenal wide forward. In fact, he provides great width from that position because he is intelligent enough to realise the advantage of stretching the pitch. He does have most of the attributes to be Arsenal’s number 9, but his finishing, which is too often wayward, needs to improve. A United supporting friend of mine nicknamed him “Unlucky, Welbeck” (note the comma). Because so often his movement and build up play were superb, tickling the crowd’s excitement, before blasting the ball into orbit when the time came to apply the finishing touch, causing the crowd to utter, “Aaaaah, unlucky, Welbeck” in unison.

He hit the inside of the post when through on goal on his Arsenal debut and fluffed his lines against Manuel Neuer at a crucial moment in his last season at Old Trafford too. The listless performance against Reading in April showed us that the team had fallen out of synch with Welbeck’s qualities. Often he made runs on the shoulder of defenders that weren’t rewarded. Whether his teammates simply didn’t trust his finishing abilities, or whether they had simply become accustomed to using Giroud as a static pivot is open to debate. The team would need to reacclimatise to having a player like Welbeck as a number 9, but then, if Wenger buys someone like Benzema, that’s a transition they’re going to have to undergo anyway. I think Welbeck is the type of striker that Wenger really wants to use as his centre forward; it’s up to Welbeck now to prove that he is the quality of striker the manager wants. In real terms, that means refining his finishing so that he can become the killer centre forward he obviously wants to be.